It’s the half way point in NaNoWriMo and our Prompt-a-Day project is also half way through, hopefully inspiring you to look at your writing and characters in a new way.

Writers in the Grove now has 10 members participating. One participated last year, so this is a huge leap and we are so proud of everyone.

Because our group is so diverse in writing subject matter, age, and skills, we’ve made a few adjustments to the NaNoNoWriMo guidelines. Those that are willing to stick with the word count as a score card are continuing to do so, report in to NaNoWriMo’s check in for the region. Those who are intimidated by such accounting have committed to write for a minimum of an hour a day.

The same challenges that face the word count writers face the timed writers. What to write, how to say it, self-doubt, self-worth, and the dark cloud of wonder about how this will ever amount to something. The challenge is to let all of that go and just write. Edit on December 1, but for November, just write and see what happens.

We’ve heard from several people that their goals of plotting first went by the wayside as their characters took over. Now they are pantsing it, just writing by the seat of their characters’ pants, as one described it. “I just hang onto my keyboard and hope they take this thing somewhere.”

In the Portland region, we are getting closer and closer to 16 million words for those keeping score. That’s amazing. 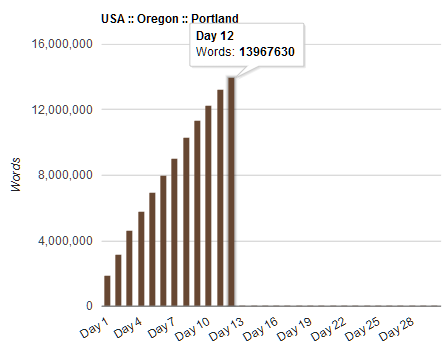 To keep the momentum going, we’ve put together some guides and helpful resources and wanted to share them with you.

Novels aren’t written by muses who come down through the ceiling and shoot magic through your fingers and out onto your laptop’s keyboard. Before NaNoWriMo, some teensy part of me still believed that because writing is a creative act, it should feel easy. But fairies don’t write novels. They’re written with one simple equation:

NaNoWriMo Survival Resources – To Get You To the Half-Way Point

The following articles and guides should help you get to the half-way point, or help you through the rest of your month long writing experiment. It is an experiment. Sometimes you know where you are going, and sometimes you have no idea, and sometimes, both are true. Edit on December 1 but keep writing through the month and see where it takes you.

Along the way, hopefully the following will help, inspire, and motivate you.

Plotting and The Anatomy of a Story