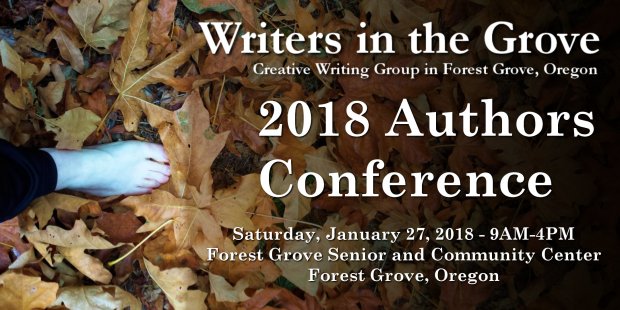 Author and writing instructor, Jessica Morrell, will be speaking at the 2018 Authors Conference on January 27, 2018, in Forest Grove, Oregon.

Jessica Morrell will be speaking on developing a character arc for your story and novel.

Jessica is a long-time favorite speaker and teacher on writing fiction, and an accomplished author. Her books, Thanks, But This Isn’t for Us, A (sort of) Compassionate Guide to Why Your Writing is Being Rejected, Between the Lines, Bullies, Bastards, and Bitches: How to Write the Bad Guys of Fiction, and Writing Out the Storm continue to be textbooks for writers determined to improve their writing and get published.

Register today to learn from Jessica Morrell on professional editing and writing at the 2018 Authors Conference in January as space is limited.

About Writers in the Grove 2018 Authors Conference

This is a fundraiser for the Forest Grove Senior and Community Center, a non-profit community center and the host of Writers in the Grove weekly meetings. The Center provides free and low cost meals through their dining services and Meals On Wheels outreach program, as well as a wide range of educational, recreational, wellness, and community events and educational opportunities.

There are some terms you need to know if you will be participating in NaNoWriMo this year.

In her post about her experience and the lessons learned, she describes the two key types of writers who participate in the National Novel Writing Month challenge, and invented her own type called plotser:

What’s a plotser? A cross between a pantser and a plotter, with maybe a wee bit more emphasis on the pre-plotting.

With Hurricane Sandy and other circumstances, my new agent (signed only on Oct 4) and I weren’t able to coordinate on what direction to take for a sequel to MUST LOVE BREECHES. So for most of October, I wasn’t even sure if I was participating in NaNoWriMo. Then at the end of the month, I decided to take up a premise that had nothing to do with BREECHES so I wouldn’t waste my time writing a sequel she didn’t want.

However, that meant I’d not spent time plotting at all.

I had what I thought was a fun premise and a sense of who the H/h were and so started one day late on November 2. I caught up with everyone over the weekend and was doing swimmingly until about Day 5, then my word count dribbled downward and things ground to a halt. I had no idea where I was going with this and I didn’t like feeling that way. This wasn’t the normal ‘what I’m writing is drivel’ feeling, I really felt like all my characters were just spinning their wheels waiting for something to happen. Like the plot. Ugh.

A local writer friend sagely advised me to take a break for a week, two weeks, to figure out the plot and then do a FastDraft blitz at the end. So I did! I ended up creating a spreadsheet to help myself stay focused on what I needed to discover…

As a result of her experience, she created the Story Engineering Worksheet (Excel Spreadsheet), a spreadsheet created in Excel that breaks down all the elements of a novel into their finest detail. To download, click, on the link or right click and save to your hard drive.

Described as a “mix of the four act/part structure, and beat sheets,” the worksheet is based on the spreadsheet by Jamie Gold called a beat sheet, a worksheet that structures your plot all on one page.

Described by Storyfix in their Lessons for Writers:

The “beat sheet” is a way to sequence your story, using bullets instead of whole sentences or paragraphs.

Yes, this is an outline, but it is more than that. It is a scene structure for your novel built around basic plot points or story arcs. END_OF_DOCUMENT_TOKEN_TO_BE_REPLACED