I was surprised during our weekly Writers in the Grove free Monday workshop meeting that some of my fellow members didn’t know about the concept of world building in writing.

When you write fiction, you create a world, literally. It may represent the real world or a fantasy world. It consists of scenes, places where events occur in your story.

Your fictional world is made up of places, people, cultures, traditions, habits and routines, weather, geology, current events, and politics.

I’m working on a story that takes place in 1979. I begin my world building by researching historical events in 1979, then branch into newsworthy stories and topics, and even some trivia. If my story is concentrated solely in the United States, and specifically a location, say Seattle, then most of my research would focus on what happened in Seattle in and around 1979. Here are some of the results of my web search.

In my research, I discover that the average income that year in the United States was $17,500, and the average monthly rent was $280, a far cry from today’s prices. A gallon of gas cost 86 cents, oil was $24 a barrel, and the Toyota Corolla was one of the most popular cars on the road and the $200 Sony Walkman was in demand by most teenagers and college students. Michael Jackson’s “Off the Wall” album won awards and played out of boomboxes everywhere, blasting “Y.M.C.A.” by The Village People off the charts. The daily news included updates on Voyager 1 as it made its closest pass by Jupiter, the Three Mile Island nuclear accident, the Moral Majority religious movement by Jerry Falwell, 63 American hostages taken in Iran, and Saddam Hussein becoming president of Iraq. John McEnroe, Tracy Austin, Bjorn Borg, and Martinia Navratilova became household names as tennis champions. We watched MASH, The Jeffersons, The Dukes of Hazzard, One Day at a Time, and Three’s Company on television. The big screen played Alien, All That Jazz, Apocalypse Now, Start Trek: The Motion Picture, Norma Rae, The China Syndrome, Being There, Life of Brian, Mad Max, and the Muppet Movie.

If you are writing about 1979, this is the world your characters lived in. They listened to that music, watched that news, those movies, and said funny things like quotes from movies and television such as “Nothing comes between me and my Calvins” (Brooke Shields ad for Calvin Klein), “Reach out and touch someone” (AT&T ad), “I love the smell of napalm in the morning” (Apocalypse Now), and “You need this for your rent, boy” (Richard Pryor).

Cultural stories might filter into conversations or even the thoughts of your characters such as when then-President Jimmy Carter explained how he almost tipped when an enraged swamp rabbit swam toward his fishing boat, or comment on the first time a milk carton featured a picture of a missing child. Or the fears that swept the globe as NASA’s Skylab fell to Earth, landing in Australia, made fun of afterwards by many when the Shire of Esperance in Western Australia fined NASA $400 for littering. Or maybe how Charles Manson sent a Monopoly “Get Out of Jail Free” card in a humorous attempt to be released by the parole board. Or maybe the dinner table discussion that night might be about the work of Mother Teresa after she won the Nobel Peace Prize. 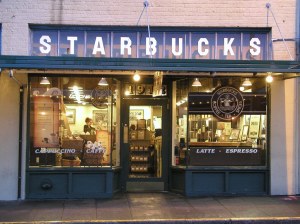 The world your characters live in influences their personalities, behaviors, even habits. A worker in 1979 living and/or working in downtown Seattle would have made sure they made a swing by Starbucks at 1912 Pike Place for a cup of their soon-to-be-famous coffee.

Now think about your characters and their relationship to this place and this time. Are all of your characters from here? Or maybe one or more of them are from different places, creating conflict when their worlds come together such as a white woman from Seattle falling in love with a black man from Mississippi in 1958, or the reverse. What about a new immigrant from Europe or Africa landing on the shores of the United States or Canada in the 1800s? Or maybe you have a person from Germany finding their way in Alabama in 1943 at the height of World War II? When we travel, we bring our worlds with us no matter where we go.

Your story may begin in any time and place. The world existed for your characters before the start of your story, and they might survive your story. Reveal the world they live in, as well as the world of history and experiences they carry with them through your story, to your readers as they shake hands and get to know your characters.

Here are a list of questions to help you define the world in which your characters live.

One last bit of advice.

If you introduce something new to the world in which your characters live, ask yourself if this change their world. How does it? If it is magic or technology, does it impact only your characters or everyone in society? How? Why? Is it good, bad, or indifferent? How do they adapt to the change? is it good for everyone or just a few?

Remember, your characters live in the test tube of your imagination. Every twist or turn in the story may create a tsunami of change beyond the bubble that is your main characters. Let your readers see and feel the change.

My father fell in love with the Cat Who books by Lillian Jackson Braun with little incentive. A long time cat lover, mystery novels involving a cat that seemed to solve the crimes, as well as about cat lovers (for the most part), was right up his reading alley. Like many, he gobbled them up as soon as each one was released.

Writing mysteries and crimes is a long-held tradition in storytelling and publishing. We have some members of Writers in the Grove who are steadfast fans of the genre.

Here are some tips on writing crime and mystery fiction to tickle your fancy and keep you up at night – reading.

Open with a bang or a body.

Think James Bond. Or Agatha Christie. James Patterson. Or Garry Rodgers. AK-47s. Or dismembered hookers. Biological bombs. Or a corpse hanging from a meat-hook. A sharp hook… which is the oldest storytelling device and still the best.

You’ve got about ten seconds to hook your reader and keep their face in the page. So start off fast and slowly add backstory. Build it up, then end with a bang. Maybe another body, too.

Among the many tips offered by the following articles is advice that applies to all forms of writing: don’t be boring, edit well, don’t write likeable characters, have plenty of conflict, have a very compelling and damaged detective/investigator, and know exactly what your story is about while you are teasing the reader along the journey.

Here on Writers on the Grove, we’ve been adding articles to help you add to your writer’s toolbox. A writer’s toolbox is a collection of reference material that helps the writer write.

Your writer’s toolbox could be digital, files stored in a folder on your computer. Or it could be in a file folder grouped by type of reference. Or in a notebook, the preferred method of many writers, with tabs segregating the various reference types.

Your writer’s toolbox isn’t limited to a single project, novel, or writing type. It is a reference guide to support your writing needs such as a list of common measurement conversions from metric to imperial, forms and templates for character and worldbuilding development, descriptions of genres and themes, cheat sheets, and whatever you need to keep you writing.

Whatever your method of storage, before, during, and after NaNoWriMo is the time to put that toolbox in order to help you write your stories.

What Goes Into Your Writer’s Toolbox

What goes into your writer’s toolbox? Anything that helps you write. Here are some examples:

Some writers create a book for each project they are writing. Others keep one book as a reference guide and keep adding to it as they learn new writing techniques and find references.

It is your writer’s toolbox, and you get to choose whatever tools you need in your kit to keep you going through all your writing projects.